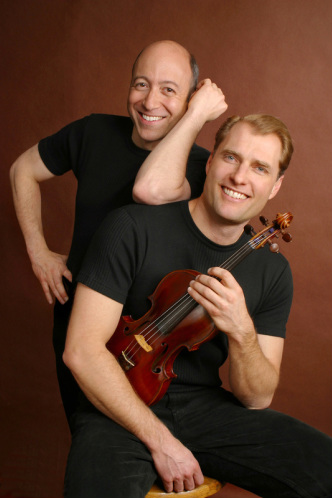 Opus Two © Photo by: Peter Shaaf
Opus Two has been internationally recognized for its “divine phrases, impelling rhythm, elastic ensemble and stunning sounds,” as well as its commitment to expanding the violin-piano duo repertoire. The award-winning duo, comprising violinist William Terwilliger and pianist Andrew Cooperstock, has been hailed for its “unanimity of style and spirit, exemplary balance and close rapport.”

Opus Two first came to international attention as winners of the United States Information Agency’s Artistic Ambassador Auditions in 1993 and has since performed across six continents, including tours of Europe, Australia, South American, Asia, and Africa. Their US engagements include performances at Carnegie Hall, where they performed Haydn’s Double Concerto for Violin and Piano, Lincoln Center, Merkin Hall and a standing-room-only recital at the New York Public Library for the Performing Arts. State Department associations have taken them to Japan, Korea, Russia, Ukraine, Germany, France, Switzerland, Peru, Ghana, and Australia, and they have also held multiple residencies in China. The duo has presented master classes worldwide at a number of prestigious institutions such as New York’s Juilliard School, Beijing’s Central Conservatory, and Kiev’s Gliera Conservatory.

Highlights of recent seasons include a return to Hong Kong where the Duo performed recitals and presented master classes at Hong Kong Baptist University and China's Guangxi Arts University, two twenty-city US tours across eleven states; performances with the Boulder Chamber Orchestra; and a European tour, which featured the duo in recital and as concerto soloists in Nice, Monaco, Bern and Geneva, and as invited guests of the US Ambassadors to Switzerland and the United Nations. The Strad praised the ensemble’s debut performance at London’s St. John’s, Smith Square as “beautifully drawn, brilliantly coloured and intense,” remarking that “violinist William Terwilliger played with supreme tenderness and finely judged control and was partnered with assurance and sensitivity by Andrew Cooperstock.”

Last season the duo commissioned Columbia, South Carolina composer Meira Warshauer to create Carolina Gallery, a musical triptych inspired by works of local artists which they performed in the galleries of the Columbia Museum of Art. The Boston Musical Intelligencer called Opus Two’s performance at Woodstock, New York’s venerable Maverick Concerts, the oldest such music festival in the country, “one of the most significant and worthwhile concerts of the season,” commenting that the program was “performed with virtuosity, musicianship and excellent balance.”

2019-2020 highlights include the Steinway Series at Silo Hill, Friday's Musicale, the Rock Hill Symphony Orchestra, The American String Teachers Association National Conference in Florida, and Opus Two's return to New York's 54 Below where they will debut a program in celebration of Stephen Sondheim's 90th birthday with new arrangements by Eric Stern followed by subsequent performances throughout the year.

Opus Two's discography features a critically acclaimed series of single-composer recordings of American music, including works by Aaron Copland, Leonard Bernstein, George Gershwin, Robert Starer, Paul Schoenfield, and Lowell Liebermann.  The duo's Naxos debut recording, Leonard Bernstein: Violin Sonata; Piano Trio; New Transcriptions features the world premiere of Four Moments from Candide by Eric Stern.  Acclaimed as "an excellent recording, performed splendidly throughout," the disc includes two additional Stern arrangements: "My House" from Peter Pan, and "Take Care of this House" from 1600 Pennsylvania Avenue, recorded with the late Tony-nominated actress-singer Marin Mazzie, as well as the duo's own transcriptions for violin and piano of Bernstein’s Clarinet Sonata. Terwilliger and Cooperstock were honored to perform this music at the New York Public Library for the Performing Arts, Lincoln Center, for the Bernstein centenary on the same stage where the Clarinet Sonata had received its New York premiere 75 years earlier.  Champions of American music, Terwilliger and Cooperstock recorded Gershwin: Music for Violin and Piano, which features selections from Porgy and Bess, Gershwin’s original Short Story, Jascha Heifetz’s arrangements of An American in Paris and Three Piano Preludes, and newly commissioned arrangements by Broadway conductor/arranger Eric Stern of selections from Gershwin’s musical Girl Crazy and classic songs from the Gershwin Songbook. Singer-actress Ashley Brown, Broadway’s original Mary Poppins, joins them on Stern's renditions of Love Walked In and Nice Work If You Can Get It. American Record Guide calls this an “excellent recording” in which “the performers throw themselves into this fresh look at Gershwin with enthusiasm and enjoyment.” The duo created a multi-media program dedicated to this music and presented it widely including a 20-concert tour of the Southeast.

A major grant from the American Music Center's Aaron Copland Recording Fund made possible Opus two's world-premiere recording, Souvenirs: Music of Paul Schoenfield, which was hailed by American Record Guide as "accomplished, sophisticated, and filled with the sheer joy of music-making."  The duo has performed Aaron Copland's complete works and their recording of his music features works never before recorded including two early unpublished preludes.  The ensemble's recording of chamber music of Lowell Liebermann features performances with cellist Andrés Díaz and the Ying Quartet, and was lauded as "splendid" by Strings magazine.  John Fitz Rogers composed Sonata Lunaris for Opus Two, whose discography also includes two discs of works by Robert Starer, featuring the world premiere recordings of Duo for Violin and Piano, as well as Dispositions, written for them and clarinetist Martha MacDonald.

In addition to their concerts as Opus Two, William Terwilliger and Andrew Cooperstock regularly join forces with Martha MacDonald as members of Trio Contraste. The trio has been honored with the Centennial Chamber Music Award for Outstanding Promotion of American Music from the National Federation of Music Clubs. Additionally, William Terwilliger and Andrew Cooperstock have collaborated together or individually with members of the Takács, Emerson, and Juilliard String Quartets, and the Dorian Wind Quintet, violinists Oleh Krysa and James Buswell, and cellists Lynn Harrell, Allison Eldredge, and Yehuda Hanani.

Prizewinner in the National Federation of Music Clubs Young Artist Competition and the New Orleans International Competition, Andrew Cooperstock has performed in most of the fifty states as soloist and chamber musician. He has also given lectures and recitals at the Hochschule für Musik Hans Eisler in Berlin, Germany, the Academy of Music in Riga, Latvia, and the Central Conservatory in Beijing, China, among others. In honor of the Leonard Bernstein centenary, he recorded a 2-CD set of the complete solo piano works of Bernstein for Bridge Records, tracks of which also appear in the 2018 Deutsche Gramophone centennial box set of the complete works of Bernstein. Cooperstock’s featured article and accompanying video appeared in the December 2018 issue of Clavier Companion.

Cooperstock is Professor of Piano at the University of Colorado Boulder, Artistic Director of the university’s Bernstein at 100 Festival, Assistant Director at the Saarburg International Music Festival and School in Germany, and a founding member of the faculty at the International Concerto Festival, which presents young soloists with orchestra in the Kroměříž Palace, where the movie Amadeus was filmed in Czech Republic. A graduate of the Juilliard School and the Peabody and Cincinnati Conservatories, he studied with Abbey Simon, Walter Hautzig, and David Bar-Illan, as well as with collaborative pianist Samuel Sanders. He is a Steinway artist.

William Terwilliger enjoys an active and diverse career as a concerto soloist, recitalist, chamber musician, orchestral musician and teacher throughout the US and on six continents. As a concert soloist he has performed with the Toledo Symphony, the South Carolina Philharmonic, The Long Bay Symphony (SC), the Rock Hill Symphony (SC), the Boulder Philharmonic (CO), L‘Orchéstre des Alpes Maritimes (Monaco), the Martinu Philharmonic (Czech Republic), and the National Orchestra of Bolivia. Currently, he serves as concertmaster of the Rock Hill and Long Bay Symphony Orchestras. A graduate of the Eastman School of Music, Terwilliger studied with Donald Weilerstein and Zvi Zeitlin, and as a member of the prize-winning Augustine String Quartet, he coached with the Cleveland, Tokyo, and Emerson Quartets. In 1993 he was invited by the US State Department to serve as a Cultural Specialist in Bolivia, and since that time, as a gifted and experienced teacher of students of all ages, he has given master classes throughout the US and in Europe, Asia, Latin America, Africa, and Australia. Dr. Terwilliger is Professor of Violin at the University of South Carolina, artist-teacher at the Saarburg International Music Festival, and founding member of the faculty at the International Concerto Festival, Czech Republic.

Both musicians regularly present and serve as jurors for such organizations as the American String Teachers Association, the College Music Society, the National Federation of Music Clubs, and Music Teachers National Association. The list of awards to their credit includes grants from the American Music Center, Chamber Music America, the National Federation of Music Clubs, and the Arts International Fund, to name a few. William Terwilliger and Andrew Cooperstock have written articles for Strings, American String Teacher, and Keyboard Companion, among others.


Fall 2019   PLEASE DESTROY ALL PREVIOUSLY DATED MATERIALS
Note: For printed programs, please use the above text as written or, if space is limited, refer to the condensed program biography. If further editing is required, please consult Genevieve Spielberg Inc. 908-608-1325 or genevieve@gsiartists.com. Thank you.